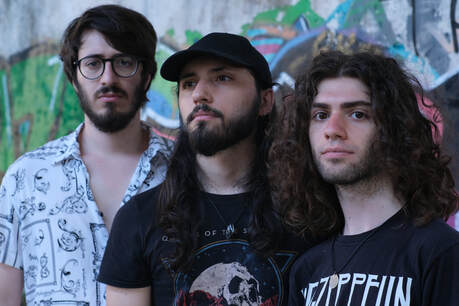 Q: Can you talk about your musical history?
​
A: In Palermo, our hometown in Italy, there's a vibrant underground music scene that struggles due to the lack of venues to host the acts. We grew up in this kind of environment, so a big part of our musical upbringing has been to just go to those few venues and be a part of the scene both as spectators and as musicians. Our biggest musical influences come from the alternative rock and alternative metal domain anyway, so it kinda fit together perfectly with the overall mood. Then, during the years of jamming that preceded the making of Pulp Of Stones we gravitated towards Vasto Records: a rehearsal room, recording studio and local label that in these last few years has managed to gather some of the best underground musicians in the city. This has been a key element in our process, because we had the chance to grow in a very home-like environment full of talent and warmness and like-minded people. Pulp Of Stones is what it is thanks to the help of Vasto and his founder Phil Caviglia, who engineered and mixed the record.

A: As State Of Neptune came to be, we realized we simply wanted to make the kind of stuff that would get our local crowd hyped up in a live show, but also try to say something personal and honest with it. The creative process goes from songs originating on the acoustic guitar in the bedroom to riffs brought to the rehearsal room and then jammed upon. For most of the time, during the writing of Pulp Of Stones, we were just a duo: Francesco (guitar/vocals) and Manfredi (drums). It was initially a deliberate choice: we had played for some years together and we were both coming out of previous projects: we wanted the freedom to explore different ideas. For the first year or so we just wrote all kinds of stuff, with no particular direction in mind. Then we came up with "Fury" and that was the turning point. After hearing the song, Phil (the Vasto Records founder) decided to join temporarily as bass player for the band. In the following months we jammed new ideas and tried to build upon what Fury had drawn for us. This was crucial because we understood much better the direction and the focus of the project. During this time we wrote "Shred Me To Bits,” which is a good example on the album of a song that started only with the main riff idea and was then built through extensive jamming. From that moment on, despite being again a duo, we had much more focus and motivation, and the rest of the album came together based on these premises, with songs originating in various ways and built through arrangement and lyrical context.

Q: I was wondering how you would explain the themes and concepts on Pulp of Stones?

A: We look at the flow of the album as an "emotive journey.” "Watershed" and "Heavy Rain On A Sunny Day,” the opener and the closer, both rely on imagery of water, light and a sense of being lost in a crowd, physically and spiritually. They are the context in which we explore themes like control mania, self-doubt, addiction, peer pressure, finding of new meanings, the carving of a personal path, overcoming trauma. However, despite coming from personal experiences and self-analysis, the aim of the album is to raise questions rather than giving answers, because these kind of themes can only be dealt with honestly in the intimacy of our individual minds. Our hope was to give an opportunity to do that through our music.

Q: Are you working on new music?

A: We actually are! Thankfully a year ago we finally found Elia, the bass player, who is now the official third member of the band. We almost immediately started jamming and writing new songs together and we are currently working on a new batch of songs that we hope will be a part of a second album in the near future.

Q: Have you started playing shows or virtual shows?

A: Yes! As soon as it could be done again. We dropped the album on the 11th of July this year so, before and after that, we have played shows all around our hometown and we will continue to do so, in order to promote it. One cool achievement has been to play in the city main stadium during Palermo Festival, a big music event that took place in the middle of June. As for virtual shows we are considering the possibility, seems like a great way to engage with audience from afar.

​A: That we will always work hard on it and try to build on the foundation that Pulp Of Stones   represents for us. We also have a videoclip underway, so be sure to keep an eye out for that!
Check out the full critique