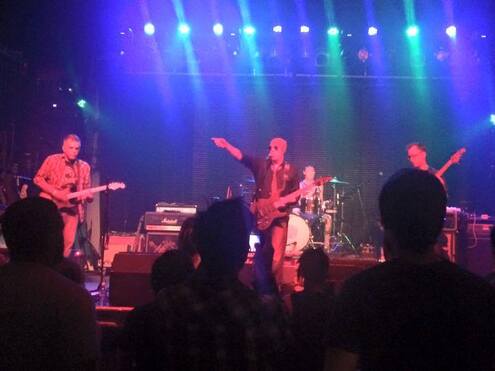 Q: Can you talk about the history of Lion Drome?

​A: Lion Drome came about like several other periods in my musical endeavors (which date back to 1994), as a reinvention or re-direction following the end of one group or project. In this case, my long-time band GasHead, which was a relatively successful thrash metal band, ran into some logistical challenges to keep going and folded in 2011 or so after nearly 10 years.

I found myself really deep-diving into Jeff Buckley at this point and started demoing ideas at home along those lines. Now I had never been a lead singer before, just a guitar player, but I was always confident enough to sing my vocal melody ideas to the vocalists in previous groups. After looking at the batch of songs I had going, two things evolved in my mind: 1. I should really be the one singing these songs instead of looking for someone, and 2. I needed to go way beyond the Buckley inspired direction and welcome in a hybrid of poppier modern/alt-rock as well as guitar focused hard rock elements. It was this nice wide berth of sound where I could tap new wave synth stuff (Duran Duran, the Cars), the introspective Buckley side and a real desire to constantly pursue “epic” type moments that you could find in artists like U2, Porcupine Tree and hard rock from the eighties. Hence, the Jeff Buckley roots of the project really took a back seat, relegated to bubbling underneath slightly.

That led to the 2014 release of Curve of the Earth, the Lion Drome debut. For some star power, I had Chris Poland play a 90-second outro solo on an alternate version of the title track. Chris gained fame as the original lead guitarist in the legendary metal band, Megadeth for their first two records. Since leaving that band he had developed a stellar reputation as a fusion instrumentalist with his band Ohm. I had worked with him once before in a GasHead song.

To support the release, I formed a gigging group and we played perhaps eight-ten shows before we lost the drummer and Lion Drome fizzled out for a few years. We also started recording some follow up material which would be revived and finished up many years later…and I guess we are getting to that now…

Q: What inspired you to make your self-titled release Lion Drone? And is there any meaning behind the name? How was your sound changed since your 2014 Curve of the Earth?

A: In the intervening years (2015-2020) I kept sort of busy just entertaining myself by recording covers at home and other COVID-banishment activities like finally officially releasing tracks from my mid-nineties band Nil (Zero! Nada! Bupkis! – the title, if you are looking) and a one-off ’80s hard rock single with my old GasHead drummer called “F16 With a Vanity Mirror.” My producer asked me what was next, and I said that I think Lion Drome should come back, write some new material and finish what we had abandoned. He got a bit excited and definitely agreed. In 2021, we started the whole machine up again and hit the studio. It’s a mix of contributing musicians but all great players I’ve used before over the years. The chemistry and playing was inspiring with bassist Mark Foerster, drummers Kenny James and Jerry Bousquet plus the musical ideas from producer Dave Beegle; they all really helped it blossom beyond what I put into it.

I kicked around some other album titles but I went with our namesake because I think when you do that, you are really laying down the gauntlet that this is a defining representation. It did go further than the debut in “mining the epic” and it was a much edgier release, whereas Curve was a bit more polite.

As for our name, the Lion Drome / Wall of Death was a featured attraction of traveling carnivals in America in the 1930’s. Basically, it was a round, bowl-like track (think of a cyclist’s velodrome) where motor cars or motorcycles would go round and round with the addition of a giant cat (often a lion) sitting in the side car next to them. The crowd would overlook below from the top. I thought it was a good interpretation of what I wanted to do musically – be a hybrid of genres and influences that would fuse together unexpectedly but attractively and with wide-ranging possibilities.

Q: Can you talk about some of the themes on the album?

A: “Here and Gone” is pretty simple. Guy meets a gorgeous girl at a club and hits it off only to find out later, she’s a bit of a social butterfly, thriving on the attention of several other admirers. The brain has an internal war with the heart about letting her go versus thinking it might work out at the end of the night.

From there, the themes have a lot more on the line, you could say.

SOL 2802 is a fairly terrifying premise. It reimagines why we lost contact with the Spirit Mars rover in 2010. The rover comes across a rock outcrop and witnesses the boulders moving along the ground in very distinct patterns. This very unnatural and unexplainable event causes the rover to experience a stress-induced electronic heart attack of sorts and it can only manage a distorted message or warning back to Earth. What the rocks have done is mimic the same patterns made by the Sailing Stones in Death Valley and once done, a very sentient Mars locks onto the location of Earth, bent on colliding with it as a defense mechanism. It would rather die than to be colonized by foreign entities.

“Fashion Blind” is a criticism of the increasing creep of White Supremacy into American politics mainstream media.“Parallel Construction” is about reaching a finality of dealing with someone else’s deep web of lies and ending the chances to be given.“That Bird Don’t Fly ‘Round Here No More (reprise) is a more dressed up version of the same song from Curve of the Earth. It follows two people who have a very passionate love affair but it quickly extinguishes at the moment of a simple conflict or issue. One of them would rather move on than put any work into being together. They are only in it for the romantic aspects void of any reality checks.

“Lips of Faith” honors the spouses of our soldiers who serve our country and the job they do keeping the family going at home, especially during times of conflict and deployment.

Somewhat along these lines is “Greatest Generation,” a tale about an alcoholic Vietnam vet who is upset about how history remembers his service compared to WW2 vets. It also borrows a bit of personal experience as my parents went to high school with a guy who went to Vietnam and came back with awful PTSD. He would wake his wife and kids up in the middle of the night, putting his hand over their mouths and have them quietly crawl on their bellies through the house as he relived his own jungle nightmares.

Finally, I had two eighties covers close out the album; Billy Idol’s “Eyes Without a Face”and Corey Hart’s “Sunglasses at night.” The theme here being a call back to some of the stylistic influences coursing through the songs.

A: I think like many artists, it starts with a kernel - usually a riff or chord series that seems like a musical section. I let that percolate in my head for a few days and I start to fill in the gaps to make it a song. It’s a very easy process for me but one key is that I always have to have something about it that satisfies and appeals to the guitarist in me. It’s not very often that I progress with a song without that factor but it has happened. Usually because the gaps I start filling in my head are very cinematic ones where the layering and production ideas come fast and furious and I’m gung-ho for the song for those reasons. 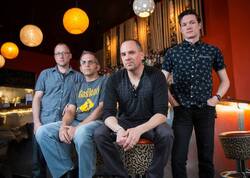 Q: What was your recording process like? And has it changed over the years? It seems like you use a lot of synths. Would you explain some of the tools you use?

A: The recording process has been the same since I got an iPad around 2010. I write demos using the DAW program Auria on the iPad, complete with a stand-in programmed drum track or click. I give the demo to the bass player and drummer and send the individual tracks digitally with DropBox to my producer and he pulls those tracks into ProTools for mixing and recording further. Eventually, the bassist and drummer get in the studio and record to those guide tracks. Many times, some of the guide tracks end up as keepers. Performances that weren’t as good - my synths, guitars and vocals, will get redone in the studio or I’ll give them another go at home. It’s very efficient. As far as keyboards and synths, I often plug in a pretty old and cheap Casio for pad stuff or maybe an electric piano sound. More sophisticated, interesting and edgy sounds come from an Auria plug-in called Magellan. I don’t use guitar amp simulators though. I mic up either my Marshall Valvestate combo or my Vox AC15 with an SM-57 for most guitar tracks.

Q:  How do you usually go about writing lyrics?

A: Following the song writing formula above, I replay the music in my head or audibly with a scratch demo many times while driving or doing work around the house. Eventually, phrases start to emerge with melodies and a subject matter construct takes shape. When I’m in writing mode, I sleep very poorly. My mind doesn’t shut off and the ideas become deeply embedded earworms.

A: I’m back in the studio with Lion Drome at the moment, recording a stand-alone single called “Black Light Cobra,” hopefully in time for Christmas. As a B-side, I’ll be including one of the many covers I recorded during COVID, a shreddy take on U2’s “I will Follow.”  This rather long (seven minute) piece of music came to me right after releasing the self-titled album in September and it kept me up many nights as this earworm that would constantly tap me on the shoulder.  I figured the only way to exorcise it was to record it. I have a feeling it will be one of the most special songs I’ve recorded – Lion Drome or otherwise.  The title is a reference to black light posters that were popular in young people’s bedrooms in the 1970’s. The lyrics are made up of song or album titles of music that I have really loved over the years. From Meg Myers to Testament; it’s name-checking some 27 artists. Its one big celebration of the discovery of new music and diving deep into it -the black light cobra poster being a symbolic witness to that. Its self-reflexive in a way because here is this piece of music that wouldn’t leave me alone that points to songs/ albums or artists in general that I’ve played over and over.

​Best places to follow Lion Drome are probably our EPK and Facebook.  We have Reverbnation as well but I’m not happy with having to use downgraded MP3s on the site. They both are connected to our Bandcamp site, where you can stream high quality and order physical product. Of course we are out there on iTunes, Spotify, Pandora etc…
Check out the full critique